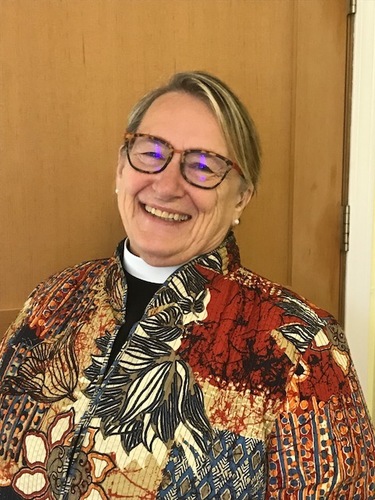 MJ grew up in Toronto, ON and was raised attending the Anglican Church of St. David.  She attended the Michener Institute in Toronto graduating as a Respiratory Therapist, MJs career included clinical practice in ICU both adult and Neonatal and teaching in Community colleges in Ontario and Nova Scotia. Discerning a call to ordained ministry she began studies and was subsequently ordained to the order of Deacons in 2003, she felt called to join her medical experience and theological formation and undertook further studies to become a professional health care chaplain. In 2010 MJ earned a Diploma in Spiritual Direction, in  2011 received her Masters in Pastoral Studies from Loyola University and Diploma in Anglican Studies from Seabury-Western Theological Seminary in Evanston IL and Certification  as an Intentional Interim Priest.  She was ordained a Priest in 2013.   MJ has served as a Transitional Ministry Specialist at churches in Chicago, Calgary and North Western Ontario. Her diocesan activities have included serving as lead trainer, Keeping God’s People Safe, and Social Justice issues including Gun Violence prevention, Anti-Racism training and support for change in the Marriage Canon of the ACC.

In May 2017, MJ  joyfully began her position of Incumbent for the Anglican Parish of St. Peter, Quamichan.

MJ and her husband Keith have three grown children: Alice, Owen and Mary-Cathrine and three grandchildren and their beloved therapy dog Fred.

Her interests include singing in community choirs, reading, Canadian History, especially the history of crafts, and Celtic, feminine and native spirituality.  MJ has had a long (50+ yrs) association with Girl Guides of Canada and looks forward to renewing that association here in the Cowichan Valley.